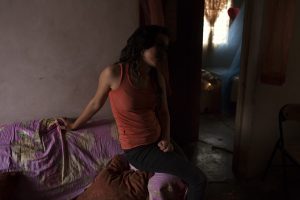 As wars between rival gangs continue to wreak havoc on Central America, more child and teen migrants are heading to the U.S. without their parents. According to a study released in 2014 by the United Nations High Commissioner for Refugees, 58 percent of Central American child migrants who arrived after October 2011 fled because of violence. With the growing number of migrants, the Obama administration is ramping up deportation efforts but the migrants face a life or death choice upon returning home: join a gang or die.

Some teens have stopped going out at night to avoid gangs; others refuse to walk in the streets, even with the presence of military police.

“These kids are fleeing countries of enormous violence,” says Eliza Klein, a former immigration judge in Chicago who quit her job in part because she no longer wanted to send child migrants back to Central America. “They are sometimes not safe sitting inside their own homes.”

More than 40,000 child migrants arrived in the U.S. from last October through June 2016, according to Customs and Border Protection.

Reporter Laura Castellanos and photographer Prometeo Lucero traveled to San Pedro Sula in Honduras for Newsweek Espanol to report on the plight of children and teens deported from the United States and facing gang violence back home. Their story in Spanish can be found here: De Regreso a la Casa del Diablo.

The project was a collaboration between Newsweek and the Investigative Reporting Program at the Graduate School of Journalism of the University of California, Berkeley. Steve Fisher’s story for Newsweek can be found here: Join a Gang or Die.

This is what the hours after being deported look like